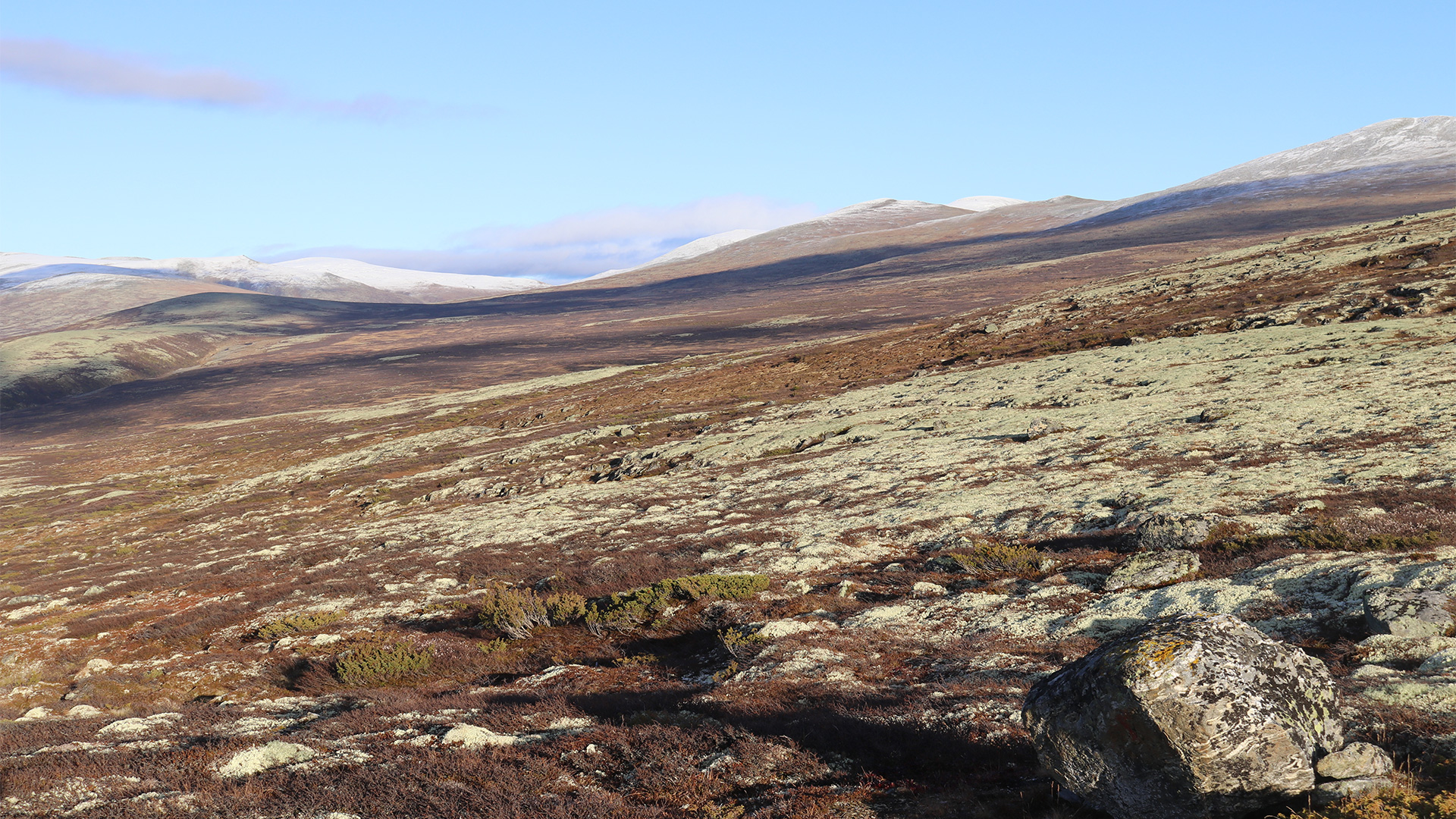 Most of the national park is located above the tree line and consists of plateaus and rounded peaks that stretch up to 1700 meters above sea level, including Storhøe mountain as the highest point which stands at 1716 masl. The landscape around the highest peaks has an Arctic feel about it, showing traces of permafrost. The area is pretty much untouched, but there is a T-marked trail between Gautåseter and Grimsdalshytta cabin, and the historical King’s Road and Pilgrim’s Path routes over Dovrefjell.

One of Europe’s last, original wild reindeer populations lives in Dovre National Park. The nomad of the mountains has been wandering through these areas for over 10,000 years, and Norwegians have hunted reindeer for more than 300 generations. Wild reindeer are extremely hardy and adaptable to natural challenges such as weather and natural conditions, but are very vulnerable to human disturbances. Our activity and presence affect the animals’ possibilities to migrate where they want to go, whether it be calving areas, or summer and winter grazing pastures. Therefore, trails and waymarked skiing trails have been adapted so that some of the wild reindeer’s habitats are left as untouched as possible. If you spot wild reindeer, it is important that you stop and move away from the area. 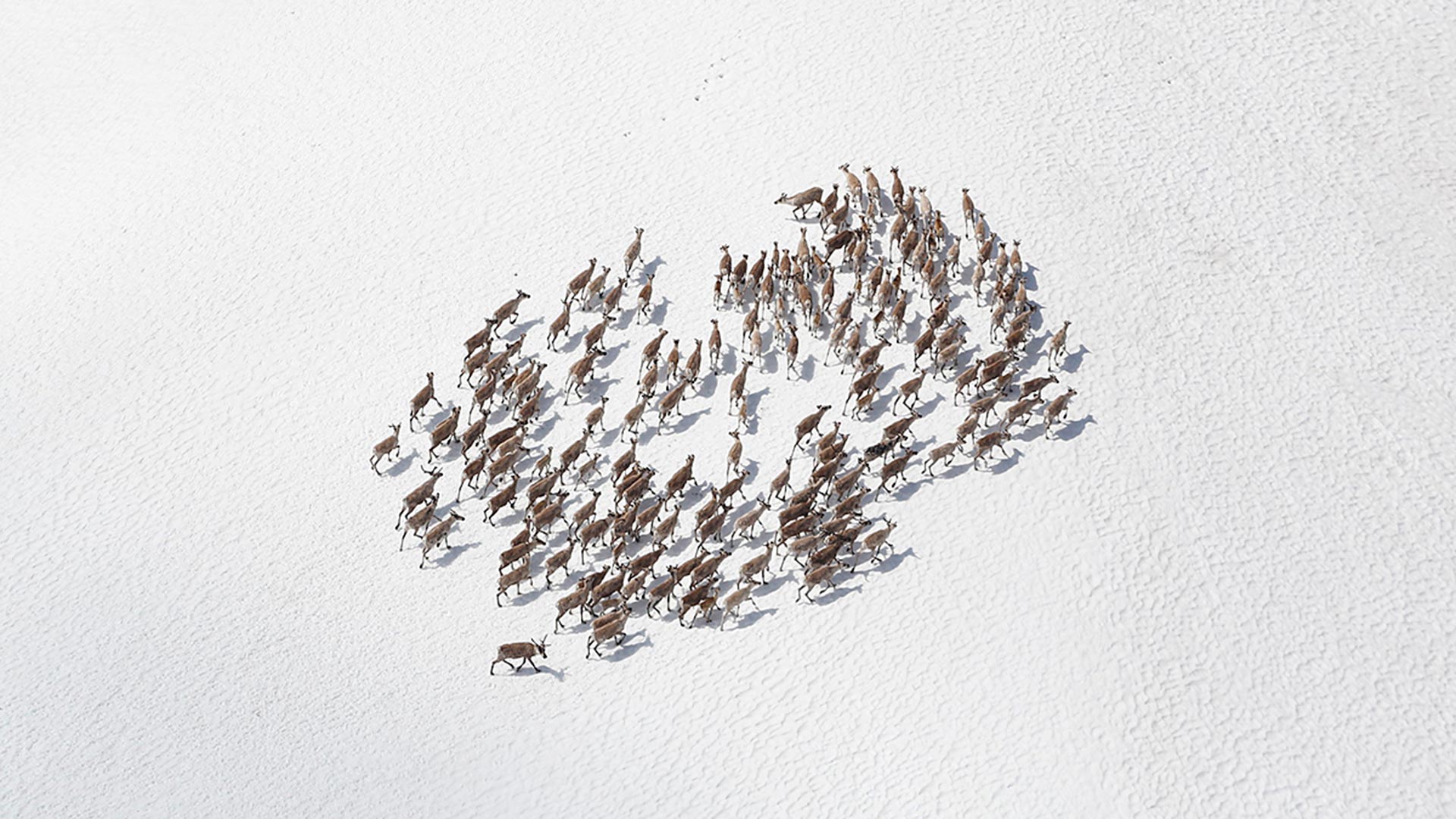 The landscape of Dovre National Park consists of undulating, plateau-like terrain. Types of rock such as greenschist and black phyllite provide the soil with plenty of minerals. The national park is located within the Trondheim Geological Region, which consists of mineral-rich rocks. The bedrock is schistous, it erodes easily and gives rise to highly productive soil that is rich in plant nutrients. 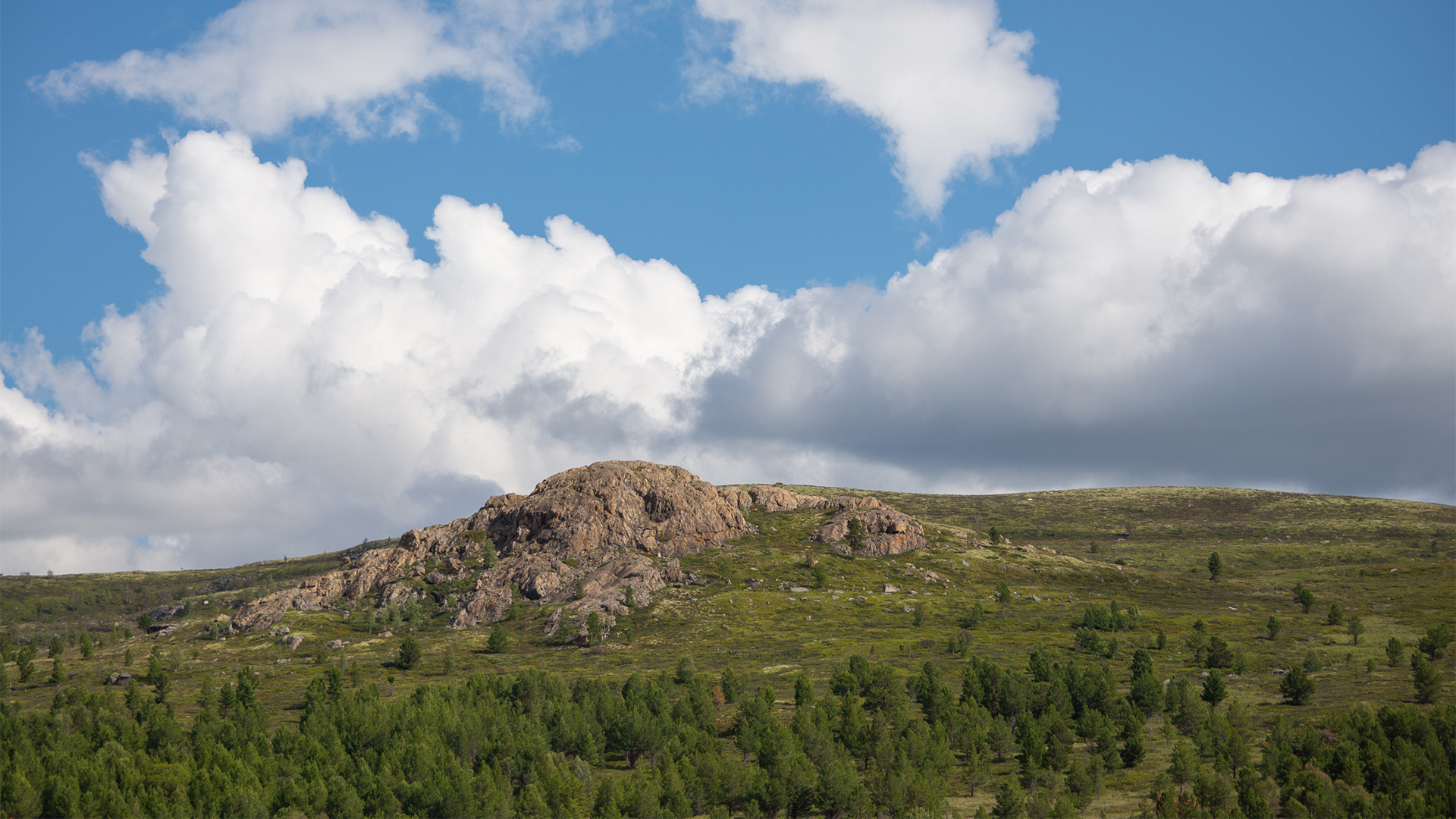 Extensive wild reindeer trapping has been carried out in Dovre National Park, dating all the way back to when the first humans arrived in the area. For thousands of years, our survival depended on the wild reindeer. The trapping revolved around the wild reindeers’ annual migration between the inland winter grazing pastures and the summer grazing grounds in more coastal areas. The historical and huge wild reindeer migration doesn’t really exist anymore. This is because various encroachments and human activity have divided wild reindeer habitat into smaller and isolated areas. Wild reindeer are still hunted in Dovre National Park, but only a limited number of hunting licenses are issued during the period August-September.

From the Middle Ages and up to the present date, Dovre and Dovrefjell have been well-known (but feared) travel routes between Oslo and Nidaros. In the Middle Ages, the roads over Dovre and Dovrefjell were used by a new group of travelers – the pilgrims. They were traveling to St. Olav’s Shrine in Nidaros Cathedral. The Pilgrim’s Path opened in 1997 – a hiking route that allows visitors to walk in the footsteps of the original pilgrims. The standard of this route has been developed over time, from paths and horse trails, to modern road construction that began in the 18th century. ‘The Pilgrim’s Path’ and ‘The King’s Road’ are different names used for this travel route.

Botanically speaking, there is a big difference between Dovre National Park and Rondane National Park. Sparagmite can be found in the ground south of Grimsdalen valley in Rondane National Park. This type of rock erodes slowly and provides few nutrients to the plant species that grow there. In Dovre National Park, the bedrock consists of Cambrian-Silurian rocks. These erode easily and form the basis for rich plant life. Dovre and Grimsdalen valley are known for their mountain flora. Over the past hundred years, several species have been found in these mountainous areas that don’t grow anywhere else. Many of them are rare and vulnerable, and the national park has the only southern Norwegian mountain prevalence of Lappland reedgrass and large populations of hawkweed-leaved saxifrage and leafy saxifrage. Below is an overview of some of the more common species one can find in the area. 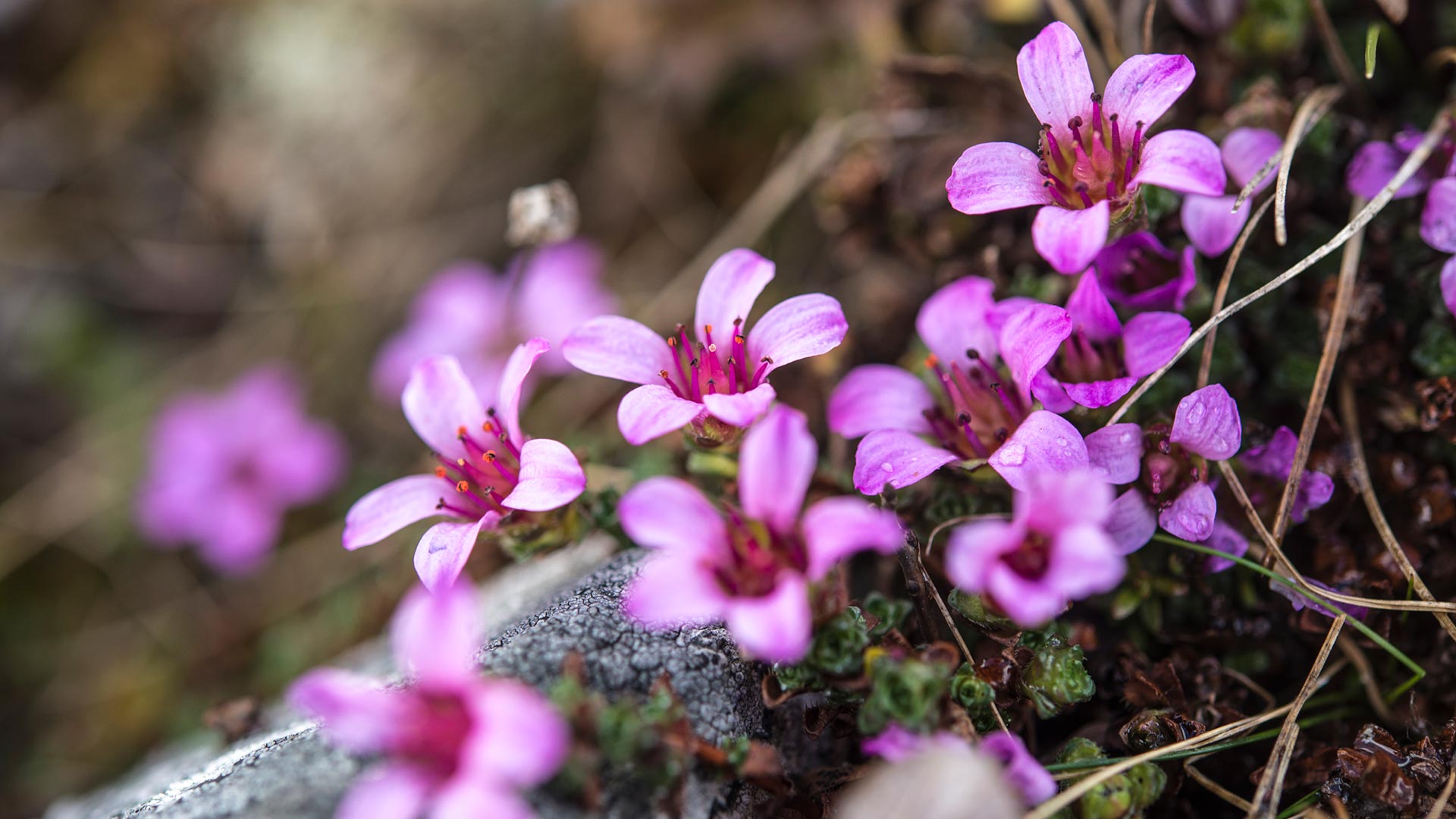 High up in the mountains, where there is only gravel and bare rock, where other plants have had to give up – we find the glacier buttercup. This is the highest growing flower in Norway, found at 2370 meters above sea level on Galdhøpiggen in Jotunheimen The name glacialis – the one that grows next to ice – tells us that this is a hardy species. The plant takes several years from germination to seeding. During the early stages of flowering, the petals are white, but then the flower begins to ‘blush’ and the petals turn a reddish color after fertilization.

This lichen covers many areas like a white carpet, and characterizes the landscape of the nutrient-poor soil that is found in and around Rondane National Park. Star-tipped reindeer lichen is of great nutritional importance to reindeer, especially during the winter. Reindeer have microorganisms in their digestive system that enable them to utilize up to 90% of the carbohydrates in the lichen. Star-tipped reindeer lichen was previously picked and used as an additional feed for livestock, but they can only utilize up to 50% of the nutrient content. It is also used for decorations.

A dwarf shrub that can be found in the mountains throughout the entire country – the Latin name ‘alpinus’ means ‘belonging in the mountains’. It grows on barren ridges where there is thin snow cover. In early autumn, the leaves turn a deep red color that really characterizes the landscape. The plant is also called Trollberry. The black berries can be used in cooking – for example, bearberry vinegar.

There is an important geological divide between Rondane and Grimsdalen. The bedrock in Grimsdalen valley consists of rocks that disintegrate very easily. This process releases minerals and other nutrients that the plants need. This is one of the reasons why Grimsdalen valley is so rich in plants, some of them being very rare. Dovre draba is one of these. It is a rare species, but visitors can see it growing along the roadside in Grimsdalen valley. Small tufts with four-petalled white flowers – you might just have found a Dovre draba – especially if you are close to the Verkses mountain farms.

From an ornithological perspective, Dovre National Park has great diversity. In years when rodent populations are large, rough-legged buzzards, long-tailed skuas and short-eared owls are common in the national park. The few lakes and marshes that can be found in the park are teeming with birdlife. Here, visitors will find species such as greater scaups, tufted ducks, common scoters, velvet scoters, long-tailed ducks, common ringed plovers, Temminck’s stint, dunlins, red-necked phalaropes and great snipes.

The vast mountainous areas of the national park are also important breeding grounds for birds, including vulnerable species such as golden eagles and gyrfalcons. Both of these species are on the Norwegian list of vulnerable or endangered species, and it is important to remember that they are particularly vulnerable to disturbances during the early stages of the breeding season. From Easter onwards, visitors must show consideration if they encounter birds of prey. If the birds are disturbed and leave their nest for more than one hour, their eggs may freeze and the year’s nesting will be wasted. Therefore, pay close attention to where you take a break in April and May. If you see birds of prey flying above you, or if they start screeching, you must move along quickly, walk to the next valley and eat your packed lunch there. Below are descriptions of some of the other birds you might see in Dovre National Park.

The Eurasian dotterel is a rather funny and distinctive mountain bird. If you want to catch a glimpse of this bird, you have to walk up the mountains to a height of 1200 to 1400 meters above sea level. Male and female Eurasian dotterels have swapped roles. After the female has laid her eggs in a nest on the ground, the male then takes charge of incubating the eggs and looking after the chicks. Female Eurasian dotterels have the most colorful plumage and can attract many males and lay eggs in several nests. Eurasian dotterels are not at all shy, they sit on their nests until you almost step on them. If they become scared, they run away and pretend to be injured. This is how they try to divert attention away from the nest and their chicks.

The snow bunting is the northernmost breeding passerine bird in the world. It is a small, stocky passerine bird that is easily recognizable due to its black and white plumage. If climate change continues, this is a species that may disappear from our mountainous areas.

The European golden plover is a medium-sized wader with a short beak. It has grayish plumage that is densely speckled with green, beige, yellow and white spots. Its underside is almost black. It nests in dry heathlands among low vegetation and is easy to spot in the mountains. 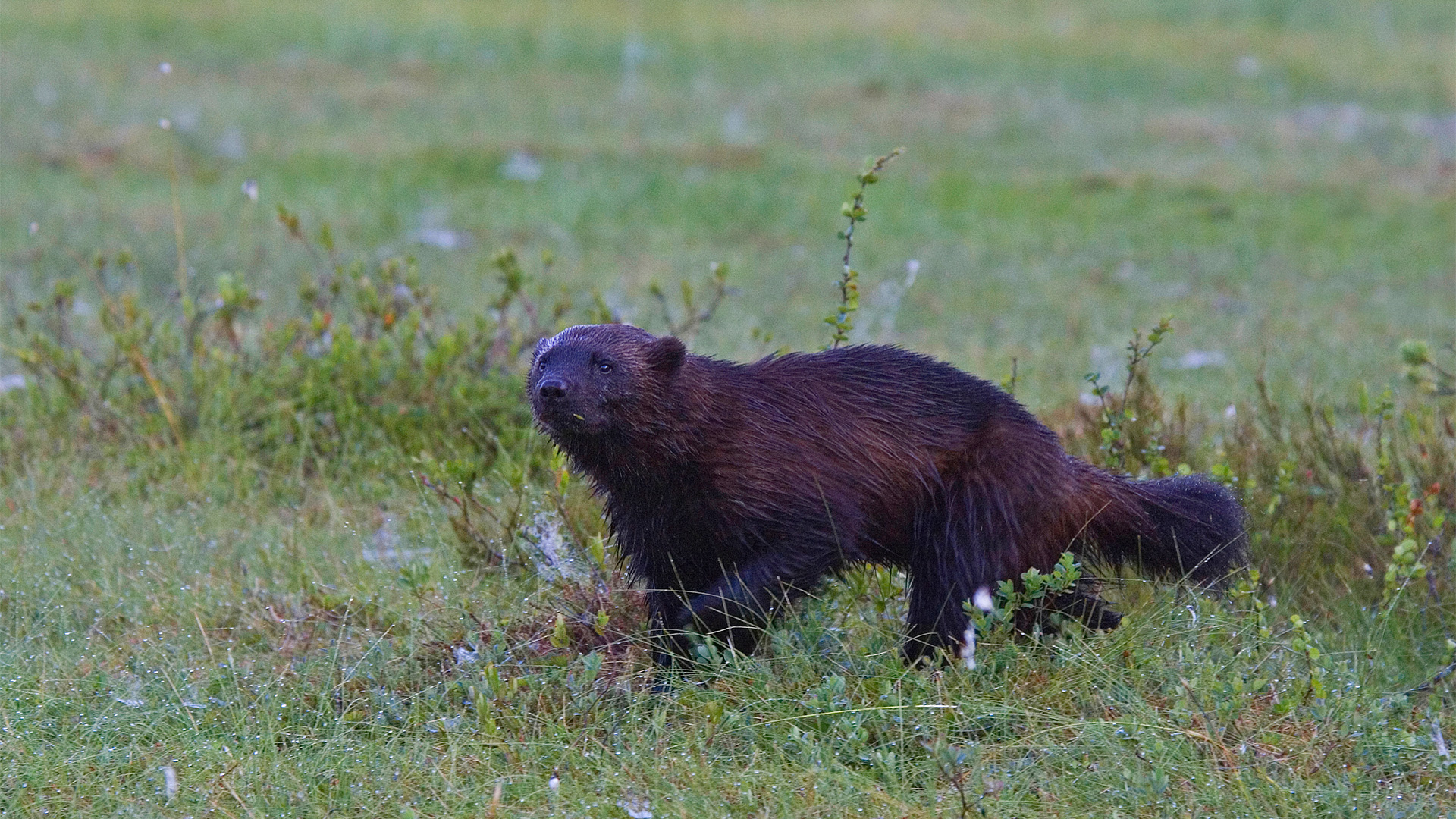 The area has a typical inland climate with cold and dry winters, and relatively dry summers. This means that permafrost is still present in Dovre National Park. Visitors may notice the permafrost in the form of peat plateaus on the marshes. A peat plateau is a large mound of peat with an ice core that does not melt. Some peat plateaus measure up to several meters across. The Norwegian Institute for Nature Research has now documented that the peat plateau marshes found in Norway have decreased in prevalence during recent years. The reason for the changes is related to an increase in temperature, but an increase in precipitation could also be a contributing factor. Peat plateau marshes are currently considered an endangered type of habitat. 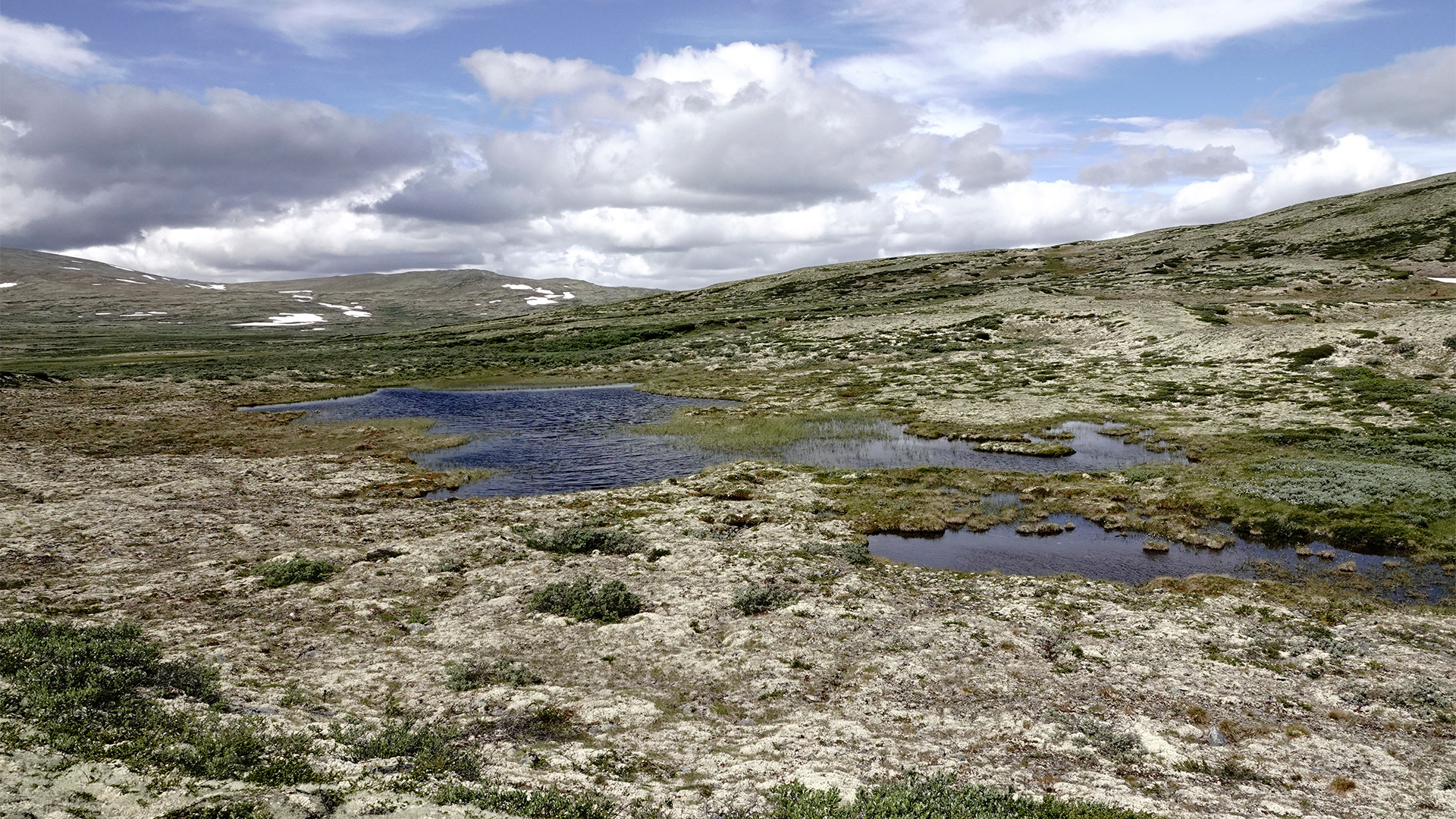 Visitors may apply for two types of hunting in the national park – wild reindeer hunting and small game hunting. The wild reindeer in Dovre are very shy, which makes the hunting very demanding. Wild reindeer hunting is considered ‘sacred’ in the villages around Rondane, for many people however, ptarmigan hunting provides the greatest mountain experience. Ptarmigan populations vary from year to year and are affected by several factors. Anyone with an approved hunting license test may apply to hunt both wild reindeer and small game at inatur.no.